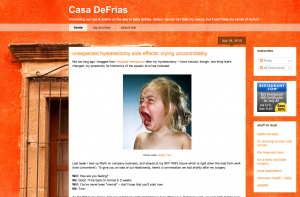 More than two years ago, Kara DeFrias began a blog about her journey to conceive a child. Over two years, this journey was unsuccessful. In the attempt to determine the cause of her infertility, doctors discovered that Kara had uterine cancer in February of 2010, at age 34. The cancer was still relatively early so while Kara had to undergo a surgery to remove her uterus and ovaries, Kara did not need chemotherapy or radiation. Prior to the surgery, Kara began working with Oncofertility Consortium members at the University of California, San Diego to undergo embryo banking. When Kara’s uterus and ovaries were removed, Kara donated some of her ovarian tissue to support the research at the Oncofertility consortium. Since her uterus was removed, Kara and her husband have begun to look into getting a surrogate for their child and it is looking promising. Kara’s chronicles are an inspiration to other fertility preservation patients. Read them here.