It is important to note that except for SSC transplantation, all of these methods will require the use of ICSI to achieve fertilization and pregnancy. ART, including IVF with ICSI is associated with additional financial, physical, and psychological risks and should be discussed with the patient families early on.

Testicular tissue contains spermatogonial stem cells (SSCs) that can be isolated from frozen tissue pieces and transplanted back into the seminiferous tubules of the patient’s testicles to produce sperm. This is the only method that has the potential to restore normal spermatogenesis and fertility in survivors (Fig. 1). Spermatogonial stem cell transplantation was first established in mice [7,8] and has since been successfully performed in other animals including non-human primates [9,10]. This approach has been attempted in a few men but the outcomes of those transplants have not been reported [11].

An alternative to transplanting disaggregated testis cells (including SSCs) back into the seminiferous tubules of the testes is to graft intact testicular tissue pieces to an orthotopic (into the scrotum) or an ectopic site (e.g. under the skin) to initiate spermatogenesis from SSCs contained in the tissue. Sperm can be recovered from the tissue after several weeks and used to achieve fertilization by ICSI (Fig. 2). Production of spermatogenesis and sperm from autografted testicular tissues has been reported in mice and non-human primates [12,13].  In humans, autologous testicular tissue grafting has not been attempted yet.

Autologous SSC transplantation or testicular tissue grafting should not be considered in cases where malignant contamination in the tissue is suspected. In these cases, inter-species xenografts (e.g. from human to mouse or human to pig) might be used to generate sperm for IVF-ICSI (Fig. 2). The production of fertilization-competent sperm in testis tissue grafted to immunosuppressed mice has been reported for non-human primates [14], but production of sperm has not yet been achieved with human testicular tissue xenografts [15-20].

SSC in vitro culture systems are being developed to expand SSCs from small tissue biopsies (Fig. 2). This approach has the potential to generate millions of stem cells for injection into the testis, increasing the chances for robust engraftment and initiation of spermatogenesis. Methods for culturing rodent SSCs are well established where the cultured cells are competent to regenerate spermatogenesis and produce viable offspring [21-23]. Several groups have reported maintaining non-human primate [24] and human SSCs in culture [25-34] but none of these reports have been replicated in other laboratories and transplantation to demonstrate spermatogenic potential and fertility is not possible in the human system. Methods to assess the function of human cells are needed to validate culture methods before they are translated to the clinic.

If frozen tissue or cells obtained from frozen tissues could be cultured in vitro to form sperm this would eliminate the need for SSC transplantation or autografting, and would circumvent the risk of introducing malignant cells back into the patient. Alternative methods have been explored in mice [35-37], and life pups were born after ICSI using haploid round spermatids and sperm matured in organ cultures of newborn mouse testicular tissue pieces [36-37]. This method has not been reported for large animals including primates.

For infertile individuals who did not preserve germ cells before gonadotoxic therapy, induced pluripotent stem cells (iPSCs) may be produced from their somatic cells (e.g., skin or blood).  In mice, iPSCs can be differentiated into transplantable germ cells that regenerate spermatogenesis and produce viable offspring [38]. These results have not been replicated in other species and transplant studies with human cells are not possible.  However, several studies have reported  that germ cells can be derived from human embryonic stem cells [39-42] and iPS cells [39,43] in vitro and have suggested that haploid cells can be generated, albeit at very low efficiency.  Significant progress in germ cell derivation, expansion, and safety has to be made before this technology will be applicable clinically. In theory, this technology could allow men who did not preserve semen or testicular tissue to father biological children using sperm generated from their somatic cells. 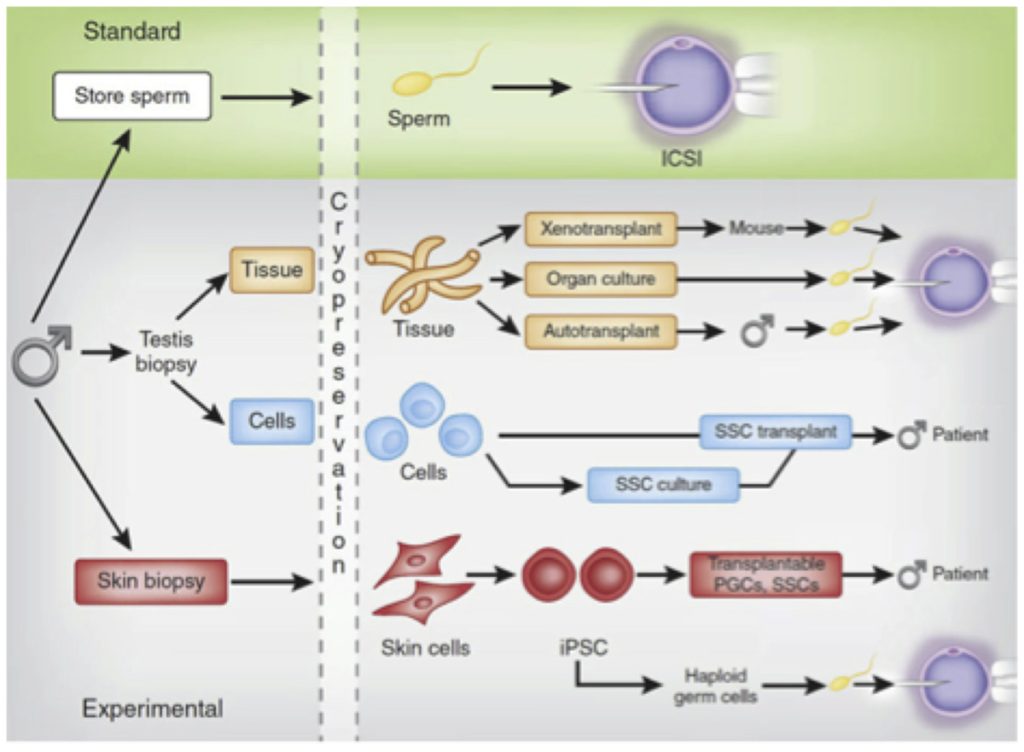 TTC is generally not recommended for patients who:

KS is characterized by severe oligo- and azoospermia. In fact, 90% of KS cases are diagnosed in the context of fertility workup. For azoospermic KS patients, TESE has been used to recover sperm for ICSI with sperm retrieval and pregnancy rates similar to those reported for non-KS non-obstructive azoospermic patients [45,46].

A few centers are cryopreserving testicular tissue biopsies or sperm retrieved by TESE for adolescent Klinefelter patients [47-50]. However, the need for early intervention in this patient population has been debated because of the success of TESE-ICSI in adult KS patients [51].

Klinefelter mosaics (47,XXY/46,XY) are generally presenting with a milder phenotype and are more often oligospermic than non-mosaic patients [52], and  the probability of recovering sperm by TESE may be greater for mosaic KS patients [48].

The cause and the course of spermatogenesis cessation in KS during puberty remains unknown and significant research will have to be done to better understand spermatogenic decline in KS, and to develop adequate fertility preservation strategies for this unique patient population