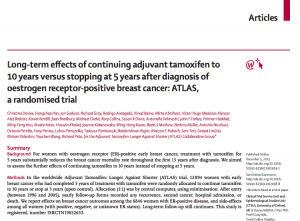 There are more than 400,000 female cancer survivors below age 40 in the United States today, due primarily to the relatively large number of young women who are diagnosed with, and beat, breast cancer. Approximately 70% of breast cancers are identified as estrogen receptor-positive (ER-positive), meaning they express estrogen receptors and grow when exposed to the hormone estrogen. Tamoxifen, an estrogen receptor antagonist (meaning it prevents activation) is used to reduce cancer recurrence and mortality in premenopausal women with ER-positive cancers. Current general practice encourages women to take Tamoxifen for at least 5 years after an initial cancer diagnosis to reduce the risk for relapse but a recent study indicates that longer Tamoxifen treatment may be even better.

The recent study published in The Lancet examined the relapse and mortality rates of women who took Tamoxifen for 10 years after initial cancer diagnosis, rather than the established 5. The authors identified that 15 years after diagnosis, cancer recurrence rates were 3.03% in the 5-year tamoxifen-treated women, compared to 2.54% in the 10-year treated women. Similarly, death in these survivors occurred in 2.29% of the 5-year treated women versus 1.64% in the women who were on tamoxifen for 10 years. These results indicate that some women may want to extend tamoxifen therapy to get maximal benefit from the drug.

It is important to note that, in the study, the majority of benefit from tamoxifen did occur in the first five years of treatment so some women may still choose to take the drug for 5 years. Multiple factors, including side effects that negatively impact quality of life, may cause women to choose the shorter treatment schedule. These include endometrial cancer, venous thromboembolic events, cataracts, hot flashes, and other symptoms associated with menopause. Currently, up to 50% of patients discontinue tamoxifen prior to reaching the 5-year mark and women under age 40 are at highest risk to discontinue therapy.

In addition to side effects, considerations about fertility may affect tamoxifen adherence rates in younger women. Tamoxifen is a teratogen, meaning it can cause prenatal malformations. Thus, young cancer survivors who are interested in pregnancy may be hesitant to take the extra years of tamoxifen examined in the study. For example, a 30 year-old woman diagnosed with cancer may be able to wait until age 35 to have children but not able to wait until age 40, when her reproductive chances have declined significantly. Given the new study and individual considerations for young women, each ER-positive breast cancer survivor should discuss the pros and cons of extending tamoxifen therapy in her specific case, with her doctor. If you have a question about your reproductive options after a cancer diagnosis, contact the Oncofertility Consortium’s FERTline at 866-708-FERT (3378).