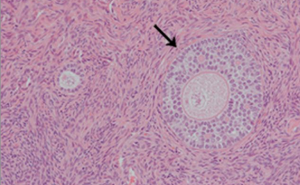 Two ovarian follicles at different stages of maturation (primary on the left, secondary on the right).

Women with ovarian lesions, such as benign or malignant tumors, or those at high risk for breast or ovarian cancer now have additional evidence that can help them decide if they would like to preserve their fertility and how. Ovarian tissue cryopreservation is an experimental fertility preservation option that may be an alternative to more established options such as oocyte and embryo banking. Ovarian tissue cryopreservation includes the surgical removal and freezing of the ovarian cortex, which contains ovarian follicles and it’s immature eggs. After later thawing, this tissue may be transplanted back into a woman once she is ready to have biological children.

Some women, such as those with ovarian tumors or with a high risk of ovarian cancer may not be candidates for this ovarian tissue transplantation. Thus, researchers at the Oncofertility Consortium are investigating the ability to mature ovarian follicles in the laboratory setting until they are able undergo in vitro fertilization (IVF).  One remaining question in oncofertility research is whether ovaries with lesions have reduced numbers of follicles, which may impact the ability to have biological children through these techniques. The paper, “Human Ovarian Tissue Cortex Surrounding Benign and Malignant Lesions,” addresses this question by examining follicle numbers in the ovarian tissue of more than 130 women.

In the article, National Physicians Cooperative (NPC) Co-director Mary Ellen Pavone MD, MSCI; NPC member, Jennifer Hirshfeld-Cytron, MD, MSCI; Oncofertility Consortium Director, Teresa K. Woodruff, PhD, and others, determined that follicle density is affected in woman with specific types of ovarian. Those with benign ovarian masses had the statistically similar number of follicles as those with physiologically normal ovaries. In contrast, women with ovarian cancer and those with a strong family history of breast or ovarian cancer had significantly reduced follicle density, although follicles were still seen in most of these tissues.

These findings, available in the journal, Reproductive Sciences, may provide fertility preservation guidance for women with ovarian lesions, and those with a strong family history of breast cancer. The authors discuss that health care providers may counsel women with benign ovarian lesions about preserving fertility with ovarian tissue cryopreservation, to be followed by either retransplantation or in vitro maturation of follicles. In contrast, providers may indicate to women with malignant cancers and those with familial breast or ovarian cancer that they may not be ideal candidates for fertility preservation, due to the reduced ovarian follicles in these tissues.

Given the new study and individual considerations for young women, each patient should discuss her specific case with her doctor. If you have a question about your reproductive options after a cancer diagnosis, contact the Oncofertility Consortium‘s FERTline at 866-708-FERT (3378).